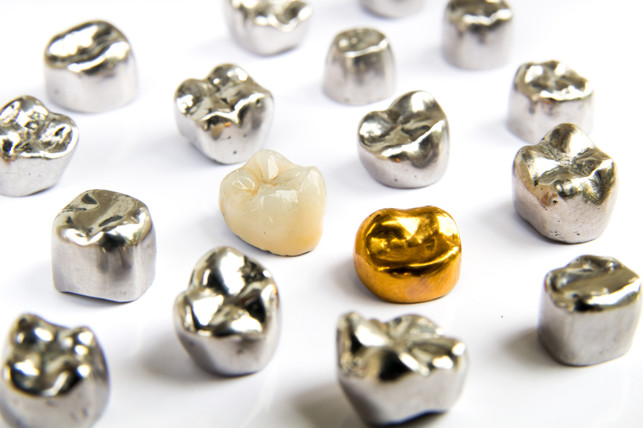 Dental crowns – or sometimes called dental caps – are prosthetic devices places over broken teeth to strengthen and improve their appearance. Crowns are used to prevent weakened teeth from fracturing, as teeth replacements, or to cover a root canal, dental implant or a weak tooth. Crowns help keep teeth functional, and prevent improper bite alignment from occurring. How – and when – did we start fixing broken or missing teeth?

The first known example of using dental crowns dates back 4,000 years in Southeast Asia, on Luzon, an island in the Philippines. The Philippine skeletons revealed basic golden caps and tooth gold tooth replacements. Scholars have found that modifying teeth with gold was popular among chiefs and the political ruling class of the period. The appearance of gold teeth was a symbol of wealth, power and status.

Around 700 B.C., the Etruscans – an ancient Italian civilization which operated in what we know as Tuscany today – also employed the use of gold as dental crowns. Luxury and wealth were important to the Etruscans, and it’s evident in their teeth. Etruscan skeletons revealed the use of rudimentary dental crowns made out of gold and put on top of teeth. Researchers have also found Etruscan remains with artificial teeth held in place by wrapping them with gold wire, and banding them next to existing teeth. This is actually the first example of dental bridges! Because of their ingenuity and willingness to experiment, the Etruscans are credited with being the first cosmetic dentists.

Europeans began experimenting with modern dental techniques in the 1400’s. During that time, they carved dentures from bone or ivory, and replaced teeth with their creations. Around the 1700’s, human teeth were a popular replacement for missing or broken teeth because of their natural appearance and obvious function. However, they did not work well as replacement teeth because bodies would quickly reject the tooth and they would fall out. Around 1770, the first porcelain dentures were made, and by the 1800’s porcelain dentures were the standard for replacing teeth.

Today, fixing teeth is down to a near perfect science, and dental crowns can be made from porcelain, ceramic, gold alloys and base metal allows. If your child has a broken tooth, then visit our office immediately. A broken tooth is a serious dental problem that needs to be treated by a team of dental professionals.